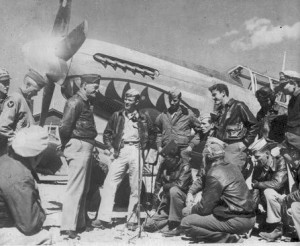 On July 4, 1942, General Claire Lee Chennault's American Volunteer Group, better known as the Flying Tigers, went out of business, turning its planes and bases over to the newly formed AAF China Air Task Force, later to become Fourteenth Air Force. A few of the AVG pilots stayed on, among them Tex Hill and Ajax Baumler, who had been an ace in Spain. Even before the turnover, AAF pilots began arriving to man the CATF's 23d Fighter Group. One of them was Maj. John Alison, fresh from a year in Russia, introducing our erstwhile allies to the P-40, A-20, and B-25.

The 23d, like its AVG predecessor, was strictly a frontier air force, operating at the end of the war's longest and most difficult supply line. Everything--fuel, ammunition, spare parts for its obsolescent P-40s--had to be flown in over the Hump. There was no ground radar and little in the way of radio aids. At one point, the 75th Fighter Squadron 'Tiger Sharks', to which Alison was assigned as Tex Hill's deputy, had nothing but five-gallon cans to refuel its fighters. 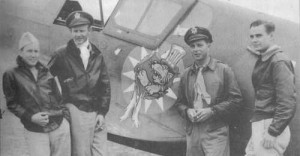 Alison's first few missions were relatively uneventful, with no Japanese aircraft showing up. Then about 3 a.m. on July 18, the warning net of Chinese ground observers reported bombers heading for the 75th's field at Hengyang. Alison and Hill stood outside their barracks about a mile from the runway and watched the bombs explode.

Alison asked Hill if the AVG had ever attacked Japanese bombers at night. It seems they had tried early on, but with no success, and had given it up. Whenever there was a moon, the Japanese enjoyed a free ride against Chinese towns and American airfields. "If they come over tomorrow night," said Alison, "I'm going to be up there waiting." 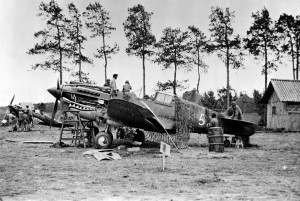 New-guy Alison convinced veteran Baumler that he was onto a good idea, and sure enough, the warning net reported approaching bombers the next night. Alison took up a position in his P-40 at 12,000 feet with Baumler below him, while warning-net position reports were relayed to them by radio.

The bombers, expecting another free ride, made two leisurely passes over the Hengyang runway before Alison was able to pick up the faint flame from their engine exhausts above him as the bombers turned on their bombing run. He pulled up the nose of his P-40, firewalled the throttle, and at the last moment saw he was closing too fast in this unpracticed nighttime maneuver. Chopping the throttle, Alison sideslipped to kill his speed and slid smack into the middle of a three-bomber V formation.

The top turret of the bomber on his right opened up at point-blank range, stitching Alison's P-40 from nose to tail. His radio was knocked out, one slug went through the seat, and another grazed his left arm. Almost immediately the P-40's engine began to run rough. In that situation, any fighter pilot could have been forgiven for thinking the AVG was right, and now was a good time to head for home. Not Alison. He kicked his fighter around and blasted the bomber on his left with the P-40's six .50-caliber guns. Oil covered his windshield as the bomber pulled straight up and disappeared. Swinging back to the right, he exploded the bomber that had hit him. By that time, flames were popping out from the engine cowling as he turned on the lead bomber and blew it up.

Alison at last pointed the nose of his wounded fighter down, heading for the blacked-out 3,500-foot runway as the engine threatened to jump out of its mountings and flames spewed from the cowling. There wasn't time for a planned approach. He came in too fast with only one viable alternative--to overshoot and crash-land in the river about two miles ahead. Clearing a railroad trestle by inches, he hit the water with a resounding crash, climbed out of the sinking P-40, and swam to a log raft near the shore. A young Chinese man pulled the bleeding Alison out of the water.

While all this was going on, Baumler had shot down two more bombers. As a result of Alison's experiment in night interception, for which he was awarded the DSC, Japanese bombers didn't come back in darkness for almost a year. 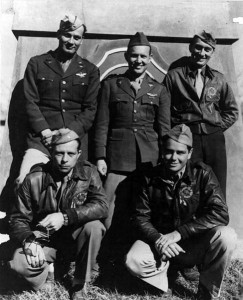 Alison ended his tour with the colorful 23d Fighter Group as an ace with six air-to-air victories and several probables. He then became Phil Cochran's deputy commander of the equally colorful 1st Air Commando Group in Burma.

After the war, Alison served as an Assistant Secretary of Commerce, President of AFA, a major general in the Reserve, and a vice president of Northrop Corp. On a visit to one of Northrop's research organizations near Boston, he was introduced to its chief engineer, a Dr. Tsien. It came out that Tsien had lived near Hengyang while Alison was stationed there.

"Were you a bomber pilot?" asked Tsien. Alison replied that he had been deputy commander, then commander of the 75th Fighter Squadron. "Then we have met before," said Dr. Tsien. "I'm the man who pulled you out of the river."

The Eastman Leather 75th Fighter Group CBI Tiger Sharks A-2 flight jacket is available now to order in the Elite Units section of the website.