The Motorcycle Queen of Miami 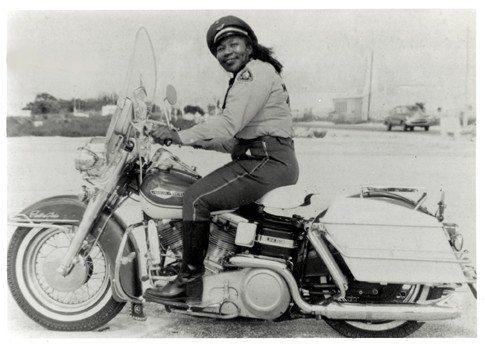 When Bessie Stringfield tossed pennies onto a map of the country, she did more than decide where to steer her motorcycle for each trip. She began creating a legend. In 1927, African American's were rarely found on roads alone, so to see a 16- year-old African American woman motoring along on her bike – in the South – must have been something. The Jamaican-born Stringfield insisted that she wasn’t out to create a scene. She just wanted to experience more of the world. She was not ignorant of what was surely rampant racial discrimination; she simply chose to live her life around it.

Bessie B. Stringfield, a.k.a. “BB,” was the first black woman to make eight long-distance solo tours across the U.S. on a motorcycle. In the 1930’s, BB rode her motorcycle through areas known for racial violence and prejudice. She earned the nickname “The Negro Motorcycle Queen.” On her tours, she traveled through Brazil, Haiti and parts of Europe. Her next destination was determined by tossing a penny on a map. As she rode through Jim Crow country, BB would sometimes sleep on her motorcycle with a blanket if there were no safe places for her to stay during her trip.

Born in Kingston, Jamaica, Stringfield came to America as a child and was given up for adoption. At age 16, she was given a motorcycle by her Irish adoptive mother, who’s name she was not allowed to repeat. It was said that the woman gifted Bessie anything she wanted as long as she prayed to “the man upstairs” for it first. After she was given her first 1928 Indian Scout bike, she would later purchase another 27 motorcycles throughout her life.

“I never got the sense that she thought of herself as a flag-waver or a champion of civil rights,” says Ann Ferrar, who spoke with Stringfield for her book, Hear Me Roar: Women, Motorcycles and the Rapture of the Road. “Remember, she was dealing with it before the advent of what most Americans think of as the ‘modern’ Civil Rights Movement. I think Bessie was just being Bessie.”Orphaned, then adopted at age five by an Irish woman in Boston who obviously didn’t mind defying convention either, Stringfield asked for a motorcycle while in high school. She got a 1928 Indian Scout. She spent the ‘30s and ‘40s completing eight solo rides across America, on one of the 27 Harley-Davidsons she would own during her lifetime. She is quoted as saying, “To me, a Harley is the only motorcycle ever made.” At 19, calling her coin-chosen trips “penny tours,” Stringfield said she depended on the Lord to protect her as she traveled. “She was Catholic and believed very strongly in Jesus Christ and that He was watching over her,” says Ferrar. Perhaps her outspoken nature disarmed any would be attackers,even though her 5-foot, 3-inch frame may have made her an easy target. She stayed with other black people when she could and slept on her bike when she couldn’t.

Her brave spirit found her serving in the army as a civilian motorcycle dispatch rider during World War II, carrying documents between bases. Again, Stringfield unintentionally carved out a space for herself in history by being the only woman in her unit. No doubt she was the only African-American.As she approached her 40's, she settled in Miami, now single after marrying and divorcing six times, she secretly entered riding contests as a man, and after winning, removed her helmet to reveal her gender. As a result, she was often denied the prize money. Stringfield suffered the loss of three babies while married to her first husband and never had other children. She spent her time performing at stunt shows with her dogs. Now nicknamed the “Motorcycle Queen of Miami,” she also founded the Iron Horse Motorcycle Club and became a licensed practical nurse. 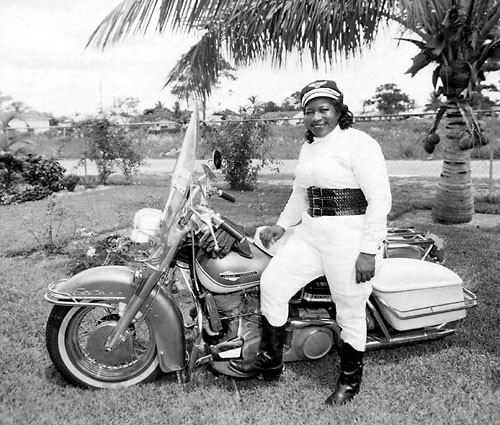 An enlarged heart began to limit her activities, but not her joy of life, says Ferrar of this “very accomplished yet very understated woman.” Stringfield died in 1993. When told by her doctor to stop riding because of her condition, Stringfield answered, “I told him if I don’t ride, I won’t live long. And so I never did quit.” In recognition of Stringfield’s pioneering spirit, the American Motorcycle Association (AMA) created the Bessie Stringfield Award in 2000. It is given to “women who have been instrumental in showing other women they can be active participants in the world of motorcycling.” Two years later, she was inducted into the association’s Hall of Fame.