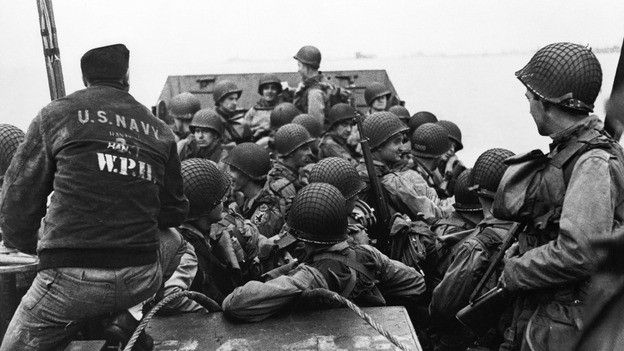 When soldiers of the 16th Regiment of the 1st Infantry Division landed at Omaha Beach on June 6, 1944, photographer Robert Capa, in the employ of LIFE magazine, was among them. Perhaps the best known of all World War II combat photographers, the Hungarian-born Capa had made a name for himself well before climbing into a landing craft with men of Company E in the early morning hours of D-Day. He risked his life on more than one occasion during the Spanish Civil War and had taken what is considered the most eerily fascinating of all war photographs. The famous image reportedly depicts the death of Spanish Loyalist militiaman Frederico Borrell Garcia as he is struck in the chest by a Nationalist bullet on a barren Iberian hillside.

Capa was known to say, "If your pictures aren't good enough, you aren't close enough." On D-Day, he came close once again. With Capa standing in the very stern, his landing craft mistakenly came ashore at the section of Omaha Beach dubbed "Easy Red." Then the ramp went down. "The flat bottom of our barge hit the earth of France," Capa remembered in his book Slightly Out of Focus. "The boatswain lowered the steel-covered barge front, and there, between the grotesque designs of steel obstacles sticking out of the water, was a thin line of land covered with smoke — our Europe, the 'Easy Red' beach. "My beautiful France looked sordid and uninviting, and a German machine gun, spitting bullets around the barge, fully spoiled my return. The men from my barge waded in the water. Waist-deep, with rifles ready to shoot, with the invasion obstacles and the smoking beach in the background gangplank to take my first real picture of the invasion. The boatswain, who was in an understandable hurry to get the hell out of there, mistook my picture-taking attitude for explicable hesitation, and helped me make up my mind with a well-aimed kick in the rear. The water was cold, and the beach still more than a hundred yards away. The bullets tore holes in the water around me, and I made for the nearest steel obstacle. A soldier got there at the same time, and for a few minutes we shared its cover. He took the waterproofing off his rifle and began to shoot without much aiming at the smoke-hidden beach. The sound of his rifle gave him enough courage to move forward, and he left the obstacle to me. It was a foot larger now, and I felt safe enough to take pictures of the other guys hiding just like I was." 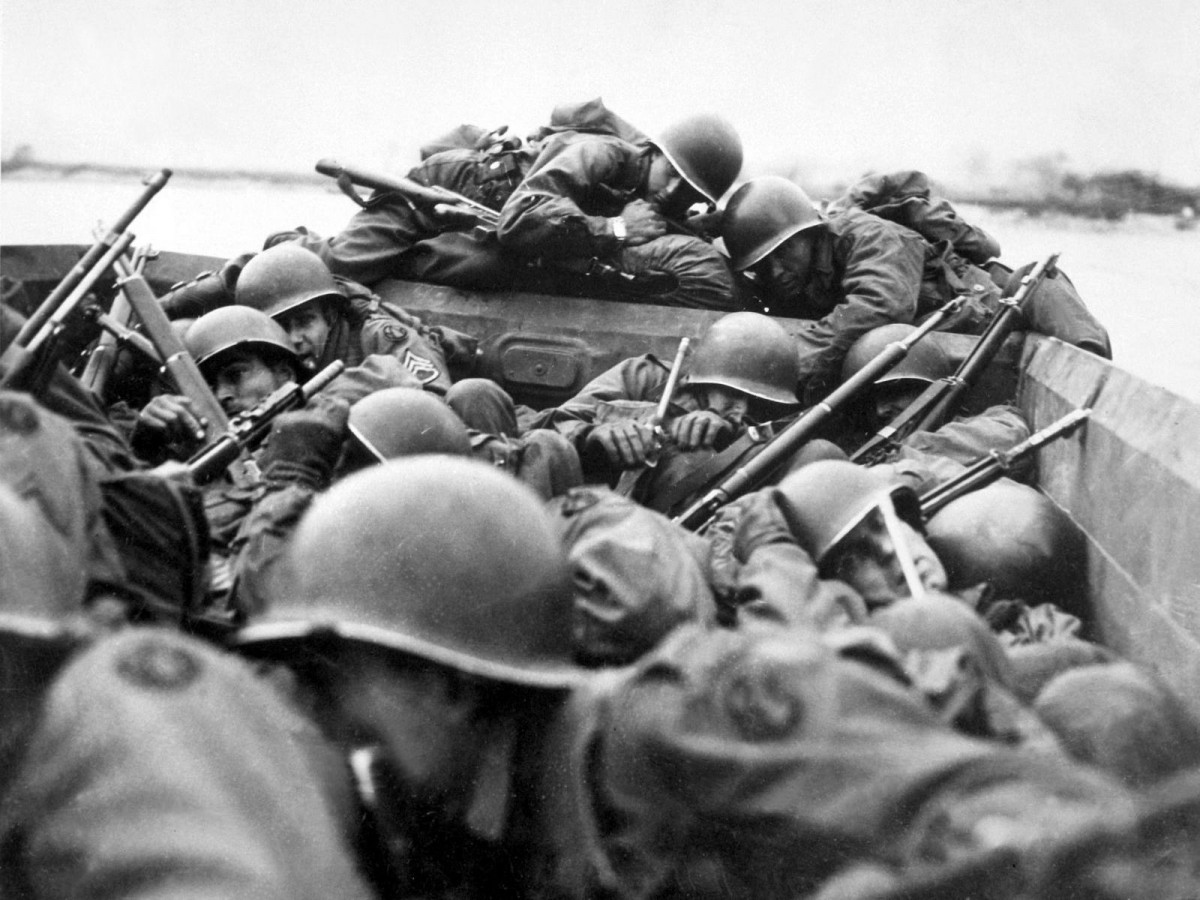 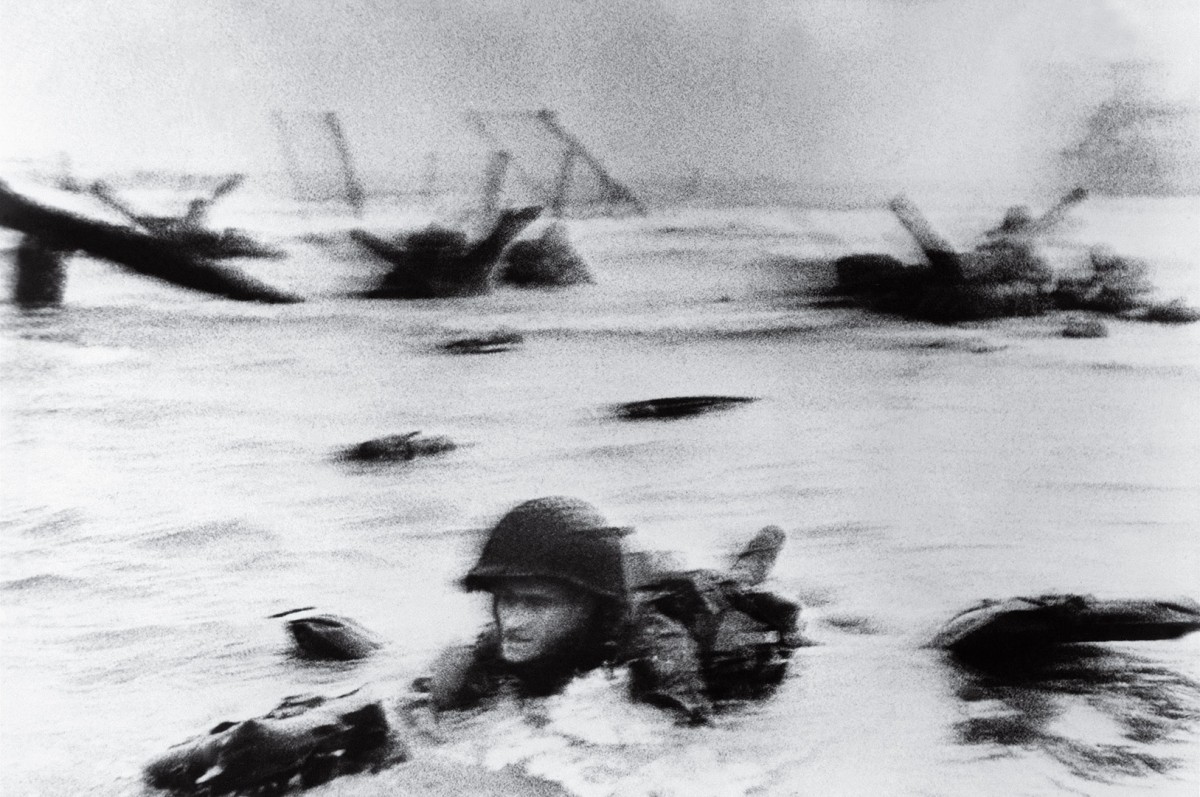 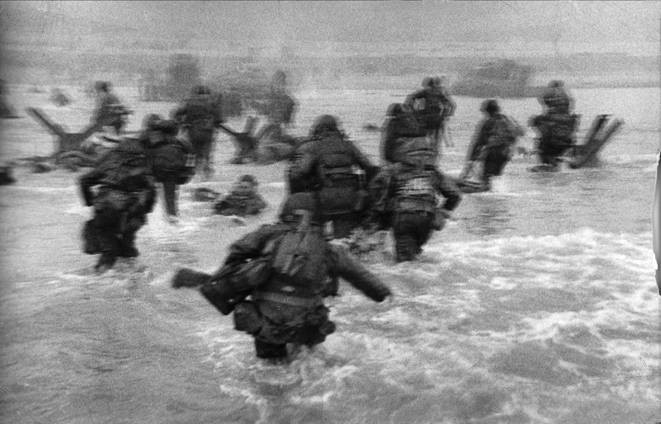 Capa was squeezing off photographs as he headed for a disabled American tank. He remembered feeling "a new kind of fear shaking my body from toe to hair, and twisting my face." With great difficulty his trembling hands reloaded his camera. All the while he repeated a sentence that he had picked up during the Spanish Civil War: "Es una cosa muy seria" ("This is a very serious business"). After what seemed an eternity, Capa turned away from the beach killing zone and spotted an incoming LCI (landing craft, infantry). He headed for it. "I did not think and I didn't decide it," he later wrote. "I just stood up and ran toward the boat. I knew that I was running away. I tried to turn but couldn't face the beach and told myself, 'I am just going to dry my hands on that boat.'"

With his cameras held high to keep them from getting waterlogged, Capa was pulled aboard the LCI and was soon out of harm's way. He had used three rolls of film and exposed 106 frames. After reaching England, he sped by train to London and delivered his precious film for developing.A darkroom technician was almost as anxious to see the invasion images as Capa himself. In his haste, the technician dried the film too quickly. The excess heat melted the emulsion on all but 11 of the frames. Those that remained were blurred, surreal shots, which succinctly conveyed the chaos and confusion of the day and became known as the Magnificent Eleven. 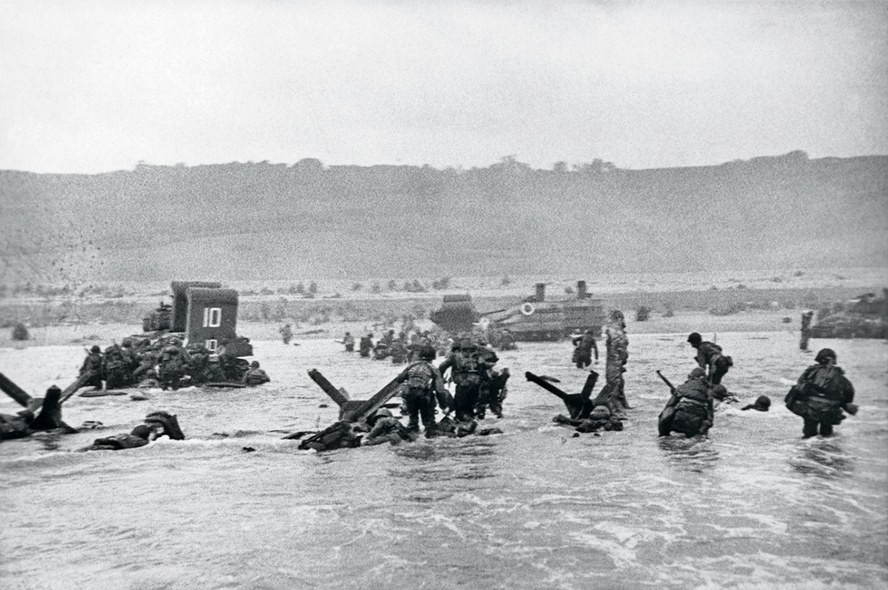 Capa's D-Day photos have become classics. One of them, depicting a GI struggling through the churning surf of Omaha Beach, has survived as the definitive image of the Normandy invasion. He went on to photograph the Arab-Israeli war in 1948. He also photographed his friends Ernest Hemingway and Pablo Picasso, as well as film star Ingrid Bergman, with whom he reportedly had a love affair. After that, having cheated death so many times, Capa vowed never to risk his life in wartime photography again. In 1954, however, he agreed to supply LIFE with some photos of the escalating conflict between the French and the Viet Minh in Indochina. That spring, while attempting to get as close to the fighting as possible, he stepped on a land mine and was killed at the age of 40. Robert Capa is one of many wartime photographers who have risked their lives and made the ultimate sacrifice to capture the essence of desperate combat on film. Frozen in time and etched in our collective memory, the D-Day photos speak volumes about courage and sacrifice