The Creation of Cool 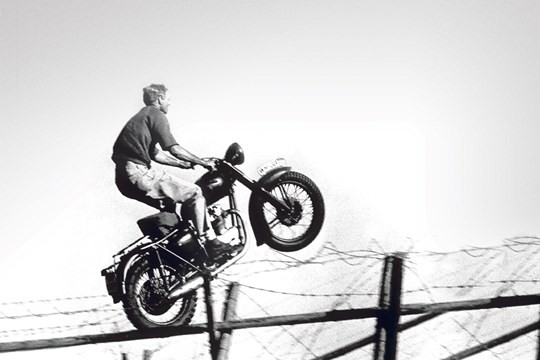 It's well documented that The Great Escape helped to formulate the Eastman brand way back in the early 1980's but who knew it's enduring tale of wartime heroism would evolve into an icon of pop culture thanks to Steve McQueen and a reissued USAAF A-2 flight jacket. What was essentially a movie costume has now become the identikit look for style conscious men around the globe. Based upon a daring escape during WWII, the Hollywood story is way off from the truth, nonetheless, there are many interesting facts that surround the movie, mostly regarding it's biggest and most hard to handle star.

When Hilts (Steve McQueen) strings a wire across the road to obtain a motorcycle, McQueen himself played the German motorcyclist who hits the wire. During filming McQueen was up to his usual antics on a daily basis – one day, the police in the German town where the film was shot set up a speed trap. Several members of the cast and crew were caught, including Steve McQueen. The Chief of Police told McQueen “Herr McQueen, we have caught several of your comrades today, but you have won the prize [for the highest speeding].” McQueen was arrested and briefly jailed.

On-set McQueen was invited to view early rushes by the director John Sturges, and realising how thin his character looked, he angrily declined to film further scenes until his were re-written. That’s what gave him the infamous motorcycle chase – while insurers wouldn’t let McQueen perform the actual jump sequence, the actor, an accomplished motorcycle rider and all-round outdoorsman was allowed to play German riders in a few stunts including the climactic motorcycle chase. Sturges allowed McQueen to ride as one of the pursuing German soldiers, so that in the final sequence, through the magic of editing, he’s actually chasing himself. He also allowed McQueen to attempt the hair raising 60 foot jump across the border fence which ended in a crash, the jump was subsequently performed by his friend and professional rider Bud Ekins. Ekins was managing a Los Angeles-area motorcycle shop when recruited. It was the beginning of a new career for him, as he later doubled for McQueen in Bullitt (1968) and did much of the motorcycle riding on the television series CHiPs (1977). 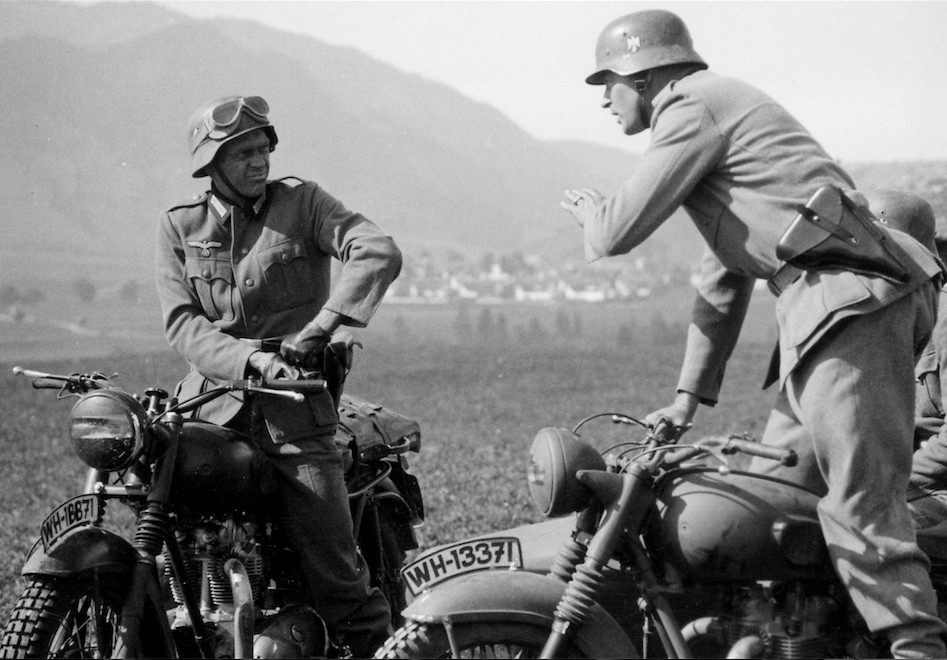 In the stunt he roars across the countryside on his stolen BMW pursued by a hoard of manic Nazi motorcyclists intent on his death. With no possible escape, great or otherwise, our hero chooses a glorious finale. Winding the bike up to maximum revs, he makes an incredible jump across the 12-foot high barbed wire fence. Today, the thought of using a road bike in a film stunt would be unthinkable. But in 1963 the world was a very different place. In many ways it wasn’t so much which bike would Bud Ekins and Steve McQueen use for The Great Escape but simply that there was only one choice – and that was the fabulous, do-everything, Triumph TR6. A key factor for the film crew was that the TR6 was very much their bike and they knew it back to front – even though it was designed and built in England. Europeans always preferred the TR6’s lighter, more nimble sibling – the 500cc TR5, but the Yanks loved the instant power of the 650. In fact, the TR6 had come about entirely from the demand by Americans for ‘cubes’. They wanted engines at least as big as the Harleys of the day and so, in 1950, Triumph made the Thunderbird for them. Almost as soon as the Thunderbird arrived in the US, riders began racing it so Triumph encouraged them first with an all-alloy TR6 and later what was effectively a single carb version of the Bonneville – the ‘Great Escape’ bike.

During idle periods while the movie was in production, all cast and crew members – from stars Steve McQueen and James Garner to production assistants and obscure food service workers – were asked to take thin, five-inch strings of black rubber and knot them around other thin strings of black rubber of enormous length. The finished results of all this knotting were the coils and fences of barbed wire seen throughout the film. 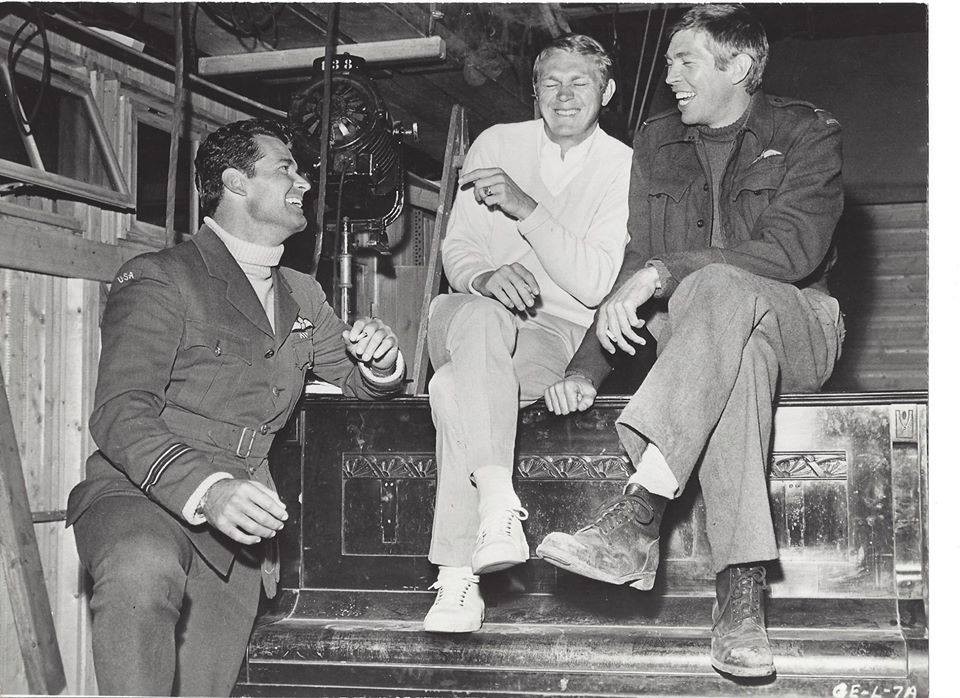 Charles Bronson, who portrays the chief tunneller, brought his own expertise and experiences to the set: he had been a coal miner before turning to acting and gave director John Sturges advice on how to move the earth. As a result of his work in the coal mines, Bronson suffered from claustrophobia just as his character had. During production, Charles Bronson met and fell in love with David McCallum’s wife, Jill Ireland, and he jokingly told McCallum he was going to steal her away from him. In 1967, Ireland and McCallum divorced, and she married Bronson.

Several cast members were actual P.O.W.s during World War II. Donald Pleasence was held in a German camp, Hannes Messemer in a Russian camp and Til Kiwe and Hans Reiser were prisoners of the Americans. Donald Pleasence had actually been a Royal Air Force pilot in World War II, who was shot down, became a prisoner of war and was tortured by the Germans. When he kindly offered advice to the film’s director John Sturges, he was politely asked to keep his “opinions” to himself. Later, when another star from the film informed John Sturges that Pleasence had actually been a RAF Officer in a World War II German POW Stalag camp, Sturges requested his technical advice and input on historical accuracy from that point forward. Wally Floody, the real-life “Tunnel King” (he was transferred to another camp just before the escape), served as a consultant to the filmmakers, almost full-time, for more than a year.

Paul Brickhill, who wrote the book from which the film is based, was piloting a Spitfire aircraft that was shot down over Tunisia in March 1943. He was taken to Stalag Luft III in Germany, where he assisted in the escape preparations. The real-life escape preparations involved 600 men working for well over a year. The escape did have the desired effect of diverting German resources, including a doubling of the number of guards after the Gestapo took over the camp from the Luftwaffe. Some aspects of the escape remained classified during production and were not revealed until well after. The inclusion of chocolate, coffee and cigarettes in Red Cross packages is well documented, as is their use to bribe Nazi guards. Other materials useful for escaping had to be kept secret and were not included in the novel or screenplay. Also not revealed until many years later was the fact that the prisoners actually built a fourth tunnel called “George.”

The film was shot entirely on location in Europe, with a complete camp resembling Stalag Luft III built near Munich, Germany. Exteriors for the escape sequences were shot in the Rhine Country and areas near the North Sea, and Steve McQueen’s motorcycle scenes were filmed in Fussen (on the Austrian border) and the Alps. All interiors were filmed at the Bavaria Studio in Munich.