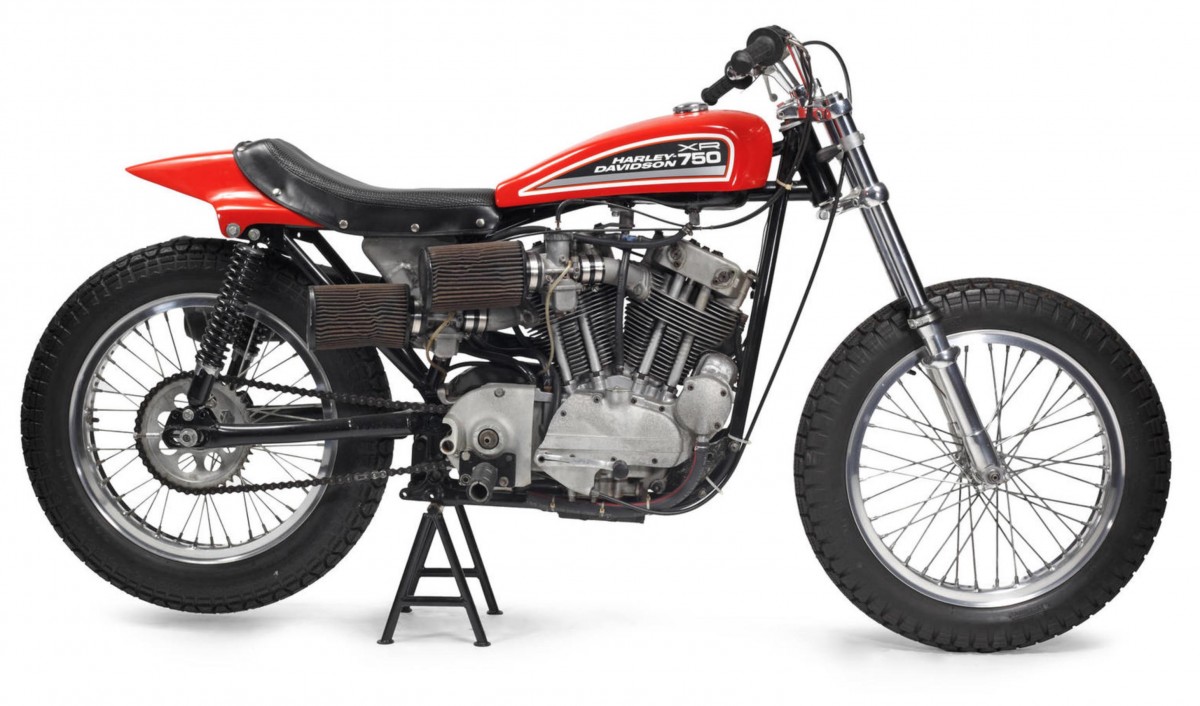 Since I was 14 years old, when I first saw a photo of one in a magazine, I dreamt of riding and owning an XR - I mean a real one - the nasty, snorting, flat track race version. The Harley Davidson XR-750 is nothing short of a legend among motorcycles. The bike has more AMA wins that any bike in history, and it’s been called “the most successful race bike of all time.” Besides its well-known flat track dominance, the XR-750 was the favoured jump bike of Evel Knievel, and versions have competed successfully in road racing and hill climbing — where a nitrous-injected version of the engine was estimated to top 150 horsepower!

Prior to 1969 the American Motorcyclist Association (AMA) rules for the AMA Grand National Championship were deliberately structured to favour side-valve engines rather than overhead-valve engines. The result of this was to favour American made bikes such as those from Harley-Davidson with their side-valve engines, and to disadvantage the overseas competition which was mainly from British motorcycles especially Triumph, BSA, and Norton. The AMA rules prior to 1969 allowed side-valve engines of up to 750cc capacity but OHV engines were limited to 500cc. With their 50% engine size advantage the odds were stacked in the favour of the side-valve bikes. The British motorcycle manufacturers put up with that for a while but by the late sixties their market in the USA for bikes around 500cc was shrinking and customer demand for bikes in the 650cc and 750cc classes was increasing. So the British worked to get the AMA to level the playing field and in 1969 the sought after rule change was enacted so that both side-valve and overhead-valve engines of up to 750cc were allowed in the AMA Grand National Championship. The effect of this on Harley-Davidson was to precipitate the need for a new OHV-engined racing bike that could successfully compete against the Brits and keep the Stars and Stripes at the forefront of AMA competition. 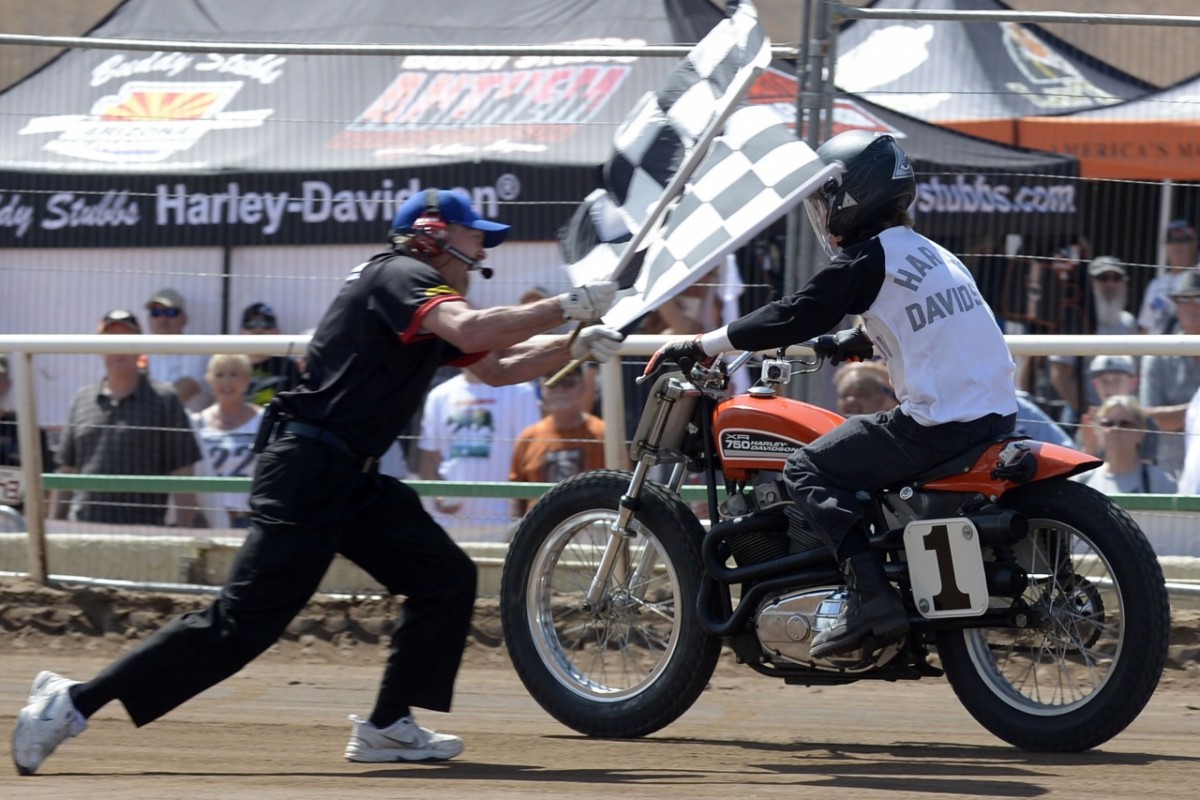 To create their new OHV racing motorcycle engine Harley-Davidson did not have to start from scratch because they already had an OHV V-twin racing engine based on the Sportster XLR, the problem being that engine was a 900cc (55 cu. in.) unit that would need to have its capacity reduced to 750cc. To accomplish this Harley-Davidson engineers decreased the engine's stroke from 3.81" to 2.983" and increased the bore from 3.0" to 3.2" bringing the engine in just under the 750cc maximum. That engine, based on the Harley-Davidson Sportster XLR, featured the four camshaft design originally created by Bill Harley back in 1929. This design provided an individual camshaft to operate each of the four valves, and although this might sound needlessly complicated, it had the advantage that each push-rod was kept at the best angle for the camshaft to operate the rocker arms and it enabled fine tweaking of the cam timing.

The cams were connected by gears to the crankshaft and formed a rugged and reliable system. This new engine with its compression ratio of 8.5:1 had iron cylinder heads, something which was to prove problematical with engine overheating leading to these engines being nicknamed “waffle irons”. Ignition was provided by a magneto mounted on the cam covers. The XR-750 Harley-Davidson flat track race bikes with the Iron Head engine raced in the 1970-1971 season. They were reasonably successful when the conditions were cool and the races were on the short side but were not competitive when conditions were hot and/or the races were long.

Although it has been tweaked and refined, today’s XR750 racers are very similar to the first “alloy” versions from 1972. Sharing direct lineage with earlier Harley production racers, the WR and the venerable KR750 both side-valve engine designs, the first XR750 appeared in 1970; the infamous “iron” XR. Starting in 1969 on dirt and 1970 on pavement, the new rules allowed a 750cc limit for all engine designs. Dick O’Brien and the Harley team began a crash course and came up with the new XR750, which in basic design was a destroked iron cylinder Sportster engine. The engine was housed in a proven KR-style swingarm chassis with Ceriani forks.The striking orange and black bodywork was the design of the Wixom Brothers. The engine made competitive horsepower, but the heat it produced led to self-destructive tendencies. Though the bike scored a respectable number of victories from 1970-’71, it also broke a lot. While stop-gap measures such as oil coolers and reduced compression helped, the factory knew what the trouble was and was concurrently building the improved “alloy” engine model. When it debuted in 1972, there were still teething problems to solve, but the basic package was a winner.

The factory produced small batches of the complete machine in 1972, 1975, 1978 and 1980. Since then, only the engine has been available, with the customer choosing an aftermarket frame from manufacturers such as Knight and C&J. The XR750 has met and defeated many foes over its 40+ years in competition. It is today facing renewed challenges from talented teams fielding machines from Kawasaki, Ducati and Triumph. The reason for Harley-Davidson’s domination is often speculated. In short, it is a purely American design for the purely American sport of half-mile and mile dirt track racing. Its tractor-type power from the 45 degree twin is the perfect tool for that purpose. Times may have changed around the XR750, but it is still out there accomplishing its intended goal; AMA Pro dirt track domination. 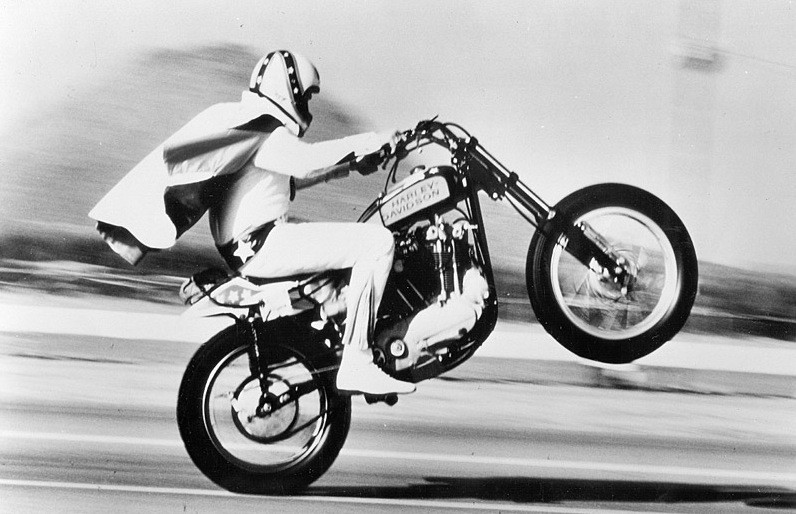 Beyond racing, the XR has also achieved notoriety as the chosen stunt bike of the legendary Evel Knievel. Robert Craig Knievel was an American daredevil and entertainer. He performed some of the most death-defying stunts on this 1972 Harley-Davidson XR-750. During his career, Knievel suffered 35 to 40 broken bones as a result of his daring stunts. In 1965, he starred in his own daredevil show bringing national attention to his stunts. His shows were televised nationwide. His show featured motorcycle "wheelies,” off-beat vehicles and jumps over rows of automobiles, trucks and buses. Knievel rode this motorcycle during some of his most spectacular jumps. His custom 1972 Harley-Davidson XR-750 was made of steel, aluminium and fibreglass, and weighed approximately 300 pounds. In 1975 he used it to jump 14 Greyhound buses.

The XR-750 was a bike that Harley-Davidson may not have wanted to create back in 1969 when they were between a rock and a hard place and they just plain had to. But in taking on that design challenge Harley-Davidson created one of the greatest bikes in the history of American motorcycling. It was and still is a bike that Bill Harley would have loved. Harley-Davidson recently brought out a new flat track dirt race bike, the XG750R. It looks like it should prove to be a worthy successor to its XR-750 godfather - but it certainly does have big boots to fill.