The 'Battle' of Los Angeles

At sunset on February 23, 1942, Commander Kozo Nishino of the Imperial Japanese Navy and his I-17 submarine lurked 1,000 yards off the California coast. It was less than three months since the attack on Pearl Harbor. Los Angeles residents were tense to say the least, soon after dark, the I-17 surfaced and began firing armour piercing shells at the Bankline Oil Company refinery in Ellwood, a small oilfield community 12 miles north of Santa Barbara. Commander Nishino targeted oil storage tanks, piers and other facilities he had toured before the start of World War II. Several of the shells struck while others passed over Wheeler’s Inn, whose owner reported the attack.

“We heard a whistling noise and a thump as a projectile hit near the house,” recalled another witness. “I thought something was going wrong with the refiners.”

The shelling continued for 20 minutes before I-17 escaped into the darkness. It was the first Axis attack on the continental United States of the war. “Shell California! Enemy U-boat sends many shots into oilfields near Santa Barbara, entire area is blacked out,” declared the February 24 front page of the Chicago Tribune.

Although there were no injuries and minimal damage (a wrecked derrick and pump house), the barrage led to a public panic that soon intensified. Witnesses claimed seeing offshore enemy “signal lights.” Many newspapers began referring to the attack as the “Bombardment of Ellwood.” Commander Nishino sailed on to new combat assignments in the Aleutians – unaware of the strange result of his attack on Ellwood’s oil refinery. Despite missing their targets, dropping into the sea, on the beach, and into nearby cliffs, the Japanese artillery shells brought dramatic result not least an “Avenge Ellwood” fund-raising campaign was created in early 1943 for a war bond drive whipping up local fervour and also bringing about Japanese- American internment in California. 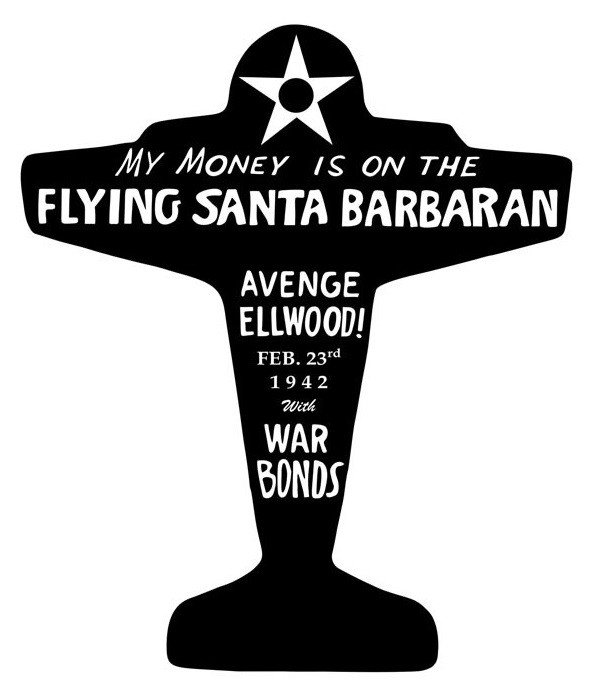 The attack not only fuelled West Coast invasion fears, but also soon led to the largest mass UFO sightings in U.S. history. In the early morning hours of February 25, 1942, the sleep of two million Americans, in the vicinity of Los Angeles, California, was interrupted by the sound of air raid sirens and anti aircraft fire. Groggy residents awakened by the high pitched warnings and the almost ceaseless firings of artillery were rewarded with a light show that made the night into day.

Thousands of U.S. Army anti-aircraft searchlights flooded the skies searching for attacking aircraft. They rapidly crisscrossed the black void desperately hoping their beams would pierce the black veil and disclose the enemy planes. Only days after the surprise Japanese attack, Los Angeles was not prepared for another sneak attack as the events of the morning would reveal.

Katie, a young woman that had volunteered to be an air raid warden received a phone call from her district supervisor. The supervisor notified her of the alert and then asked if she had seen an object in the sky that was very close to her home. Without hesitation she went to the window and looked into the sky. "It was huge! It was just enormous! And it was practically right over my house. I had never seen anything like it in my life!" she said. "It was just hovering there in the sky and hardly moving at all." "It was a lovely pale orange and about the most beautiful thing you've ever seen. I could see it perfectly because it was very close. It was big!"

Katie added that the anti-aircraft searchlights had completely surrounded the object. "They sent fighter planes up and I watched them in groups approach it and then turn away. There were shooting at it but it didn't seem to matter." Katie states that U.S. fighter planes did attack the object. "It was like the Fourth of July but much louder. They were firing like crazy but they couldn't touch it." "I'll never forget what a magnificent sight it was. Just marvellous. And what a gorgeous colour!", said Katie.

With lights off, residents were now able to witness what was to be known as the "Battle of Los Angeles". It was a scene often depicted in future Hollywood science fiction movies. The "War of the Worlds" seems eerily familiar as U.S. military personnel bombard the space invaders with hundreds of artillery shells, bathed in brilliant light from an array of searchlights. The 37th Coast Artillery Brigade's antiaircraft batteries began firing at 3:08 a.m. and ceased at 4:14 a.m. In total nearly 2000 12.8 pound artillery shells were fired into the night sky at an undisclosed and seemingly indestructible object. The all clear siren was heard at 7:21 a.m. and the citizenry exhaled a collective sigh of relief. They had survived! The question as yet unanswered, who or what had attacked?

Newspaper reports were scarce. Government and military officials often gave conflicting statements to the press. Local resident witnesses were not interviewed or the information they gave not deemed credible by the news agencies. The only mention of the event in the Los Angeles Times was a brief article of page one which started with the headline: "Chilly Throng Watches Shells Bursting in Sky". The article written by Marvin Miles went on to describe "explosions stabbing the darkness like tiny bursting stars" and "searchlight beams poking long crisscross fingers across the night sky" and so on. The article did not mention an unknown object or enemy planes.

Initial reports cited witnesses seeing formations of warplanes overhead resulting in dogfights between enemy and U.S. fighter planes. Still others reported seeing flares falling from the sky. A naval intelligence warning indicated an attack was expected within the next 10 hours. Various radar stations picked up an unidentified object 120 miles west of Los Angeles. Immediately following the blackout the information centre was inundated with phone calls from patriotic citizens reporting enemy planes in the sky.

A Coast Artillery colonel spotted 25 planes at 12,000 feet over Los Angeles and others saw a balloon carrying red flares hovering over Santa Monica. The military stated that no U.S. aircraft were in the air. Stories of dogfights were erroneous. Officials explained that because of its limited number of aerial assets, the planes had remained grounded, until identified enemy planes could be located and verified.

The Secretary of the Navy Frank Knox announced at a February 25 press conference that there was no evidence of enemy planes and that the raid was simply a "false alarm". The Fourth Air Force believed that there had been no enemy planes over Los Angeles. Finally the Army issued the War Department report which indicated that between one and five unidentified objects had flown over L.A. These objects were believed to be Japanese. However, at the conclusion of World War II, the Japanese claimed that they did not send aircraft and did not attack Los Angeles or Southern California in February 1942!

Non-military witnesses, some using binoculars, describe a large orange object that moved slowly over the coast between Santa Monica and Long Beach. The object traveled the twenty miles in approximately 30 minutes and then disappeared. An employee of the Los Angeles Herald Express said that he was certain many of the artillery shells had hit their target - but had had no effect. The photograph below seemingly shows the unknown object, caught in the web of searchlights. 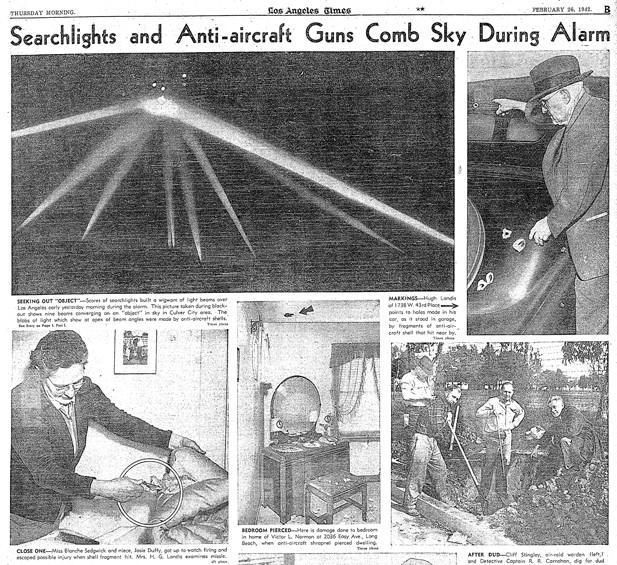 The incident has ended up with conspiracy theories attached. Was it a flying saucer attack? Was it a weather balloon? Was it a false flag operation designed to inspire support for the war effort? According to a 1980s investigation, it was just itchy trigger fingers and ‘war nerves’. The incident went on to inspire Steven Spielberg’s first war film, 1941 and demonstrates the power of mass hysteria and media manipulation.