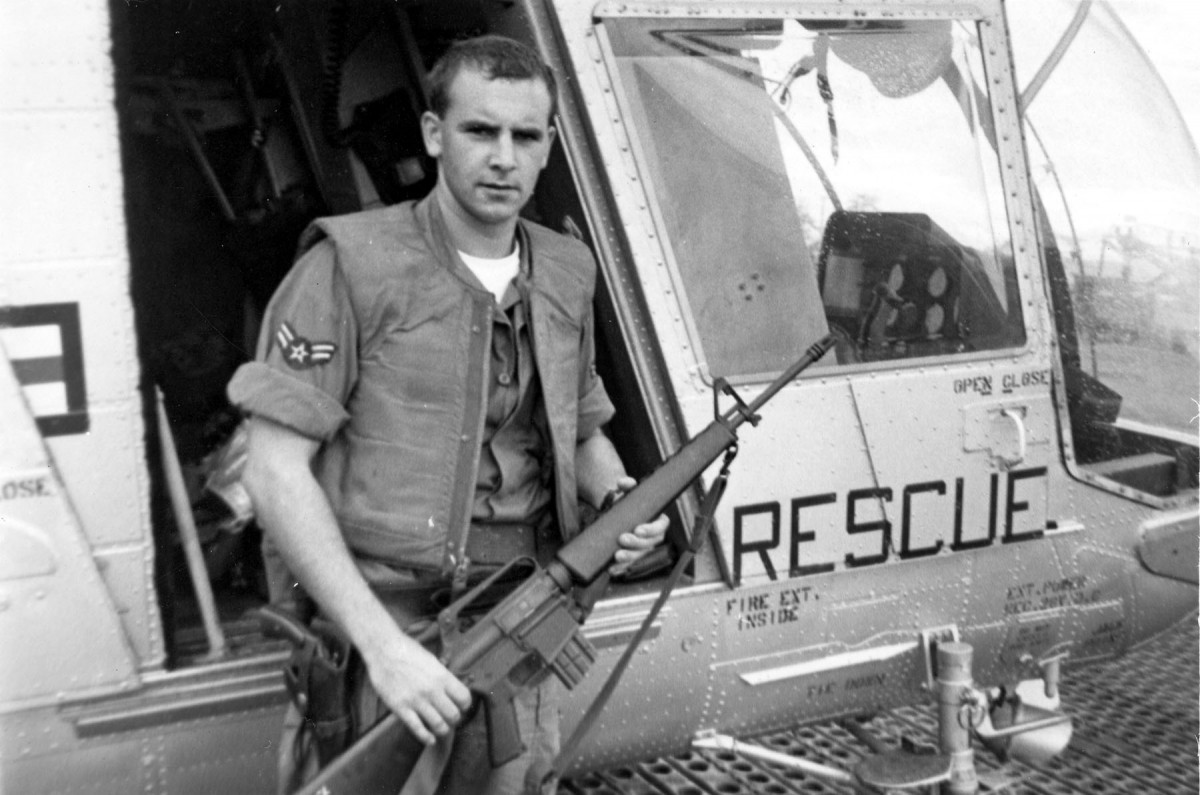 Development of Search and Rescue and the creation of a dedicated elite unit that could make the difference between life and death , or freedom and captivity evolved through WWII, Korea and the French Indochina war. It was boosted by the reality of the first losses in Laos and Vietnam during the early stages of the war., when a modified intelligence gathering SC-47 was shot down near Xiang Khouangville (Laos) on 23 March 1961, followed in February 1962 by the loss of a C-123B Ranch Hand airplane in South Vietnam.

Until then, the Air Rescue Service (ARS) had been organised as peacetime rescue units with no proper combat trained crews or aircraft adapted to the highly dangerous missions. In the early years of the US involvement in South East Asia, the World was divided into five rescue regions, each relying on a rescue centre. In December 1961, three officers and two NCOs from PARC (Pacific Area Rescue Centre) were sent to establish a Search and Rescue Centre at Tan Son Nhut Air Base. With the rapid acceleration of the USAF involvement, they were officially established as rescue coordinators. Initially they depended mostly on the Army, Marines and the Vietnamese to fulfil their missions. Rivalry between the services and the fact that the USAF was no match for the Army with the MACV chain of command delayed the development of an Air Force Search and Rescue (SAR) structure in South East Asia. The semi covert aspect of the missions also slowed the introduction of SAR units.

By 1966 a full training programme and military hardware was in place. In February that year, the maroon 'Pararescue' beret was authorised by the Air Force Chief of Staff, General John P McConnell. It was the first time a beret had been approved in the Air Force. It was officially noted that :

'Pararescue personnel are highly trained specialists who perform extremely hazardous duties demanding the very highest degree of mental and physical discipline and thus deserve to wear the distinctive attire consisting of maroon beret, bloused trousers with combat boots and special badge, both on and off base.' 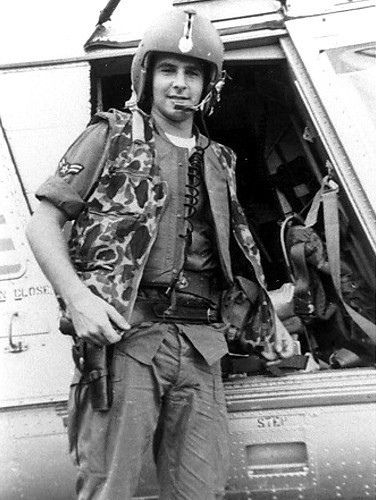 One such Parajumper was Airman First Class William Pitsenbarger. Born in 1944 in Piqua, Ohio, Pitsenbarger was an ambitious only child. He wanted to quit high school to join the U.S. Army Special Forces' "Green Berets," but his parents convinced him to stay in school. After graduating in 1962, Pitsenbarger joined the Air Force. After Air Force basic training, he volunteered for Pararescue work and embarked on a rigorous training program, which included U.S. Army parachute school, survival school, a rescue and survival medical course, and the U.S. Navy's scuba diving school. More Air Force rescue training and jungle survival school followed. His final training was in air crash rescue and firefighting, with assignment to the HH-43 Huskie helicopter.

Arriving in Vietnam in August 1965, Pitsenbarger completed more than 250 missions, including one in which he hung from an HH-43's cable to rescue a wounded South Vietnamese soldier from a burning minefield. This action earned him the Airman's Medal and the Republic of Vietnam's Medal of Military Merit and Gallantry Cross with Bronze Palm. Pitsenbarger was only 21 years old when he was killed in action. But in his short life and valorous Air Force career, he was an example of dedication, compassion and tenacity for all those with whom he served.

On April 11, 1966, in thick jungle near Saigon, an infantry company on 134 soldiers from the 1st Infantry Division (the "Big Red One") was surrounded by a Viet Cong battalion of approximately 500 troops. In a fierce firefight, the North Vietnamese surrounded and pinned down the Americans. As the battle went on, the number of U.S. casualties grew steadily. This would be Pitsenbargers final mission and his actions embodied the pararescueman's motto: "That Others May Live."

Detachment 6 of the USAF's 38th Aerospace Rescue and Recovery Squadron received an urgent call to evacuate the wounded. Army helicopters could not land in the battle zone because there were no clearings in the tall, dense "triple canopy" forest. The tallest trees rose 150 feet, and a second layer stood at about 100 feet, with a third layer below. Only U.S. Air Force HH-43 Huskie helicopters with cables and winches could hoist the injured from the jungle. Airman Pitsenbarger was the rescue and survival specialist aboard "Pedro 73," one of the two Huskies on the mission. The Huskies were to take turns hoisting litters with critically wounded patients through the forest canopy and delivering them to a nearby airfield. Pedro 73's crew, while under fire and hovering in a hole in the forest below the tallest trees and barely large enough for the Huskie, saw that the ground troops desperately needed help loading wounded into the litter. Pitsenbarger volunteered to be lowered to the ground to help. He descended a hundred feet into the firefight with a medical bag, a supply of splints, a rifle and a pistol.

On the ground, Pitsenbarger organised and speeded the evacuation, enabling the Huskies to rescue nine soldiers on several trips. Normally, pararescuemen return to the helicopter, but Pitsenbarger chose to stay and help the beleaguered troops. As the fight continued, Pedro 73 was badly damaged by ground fire and forced to withdraw. Rather than escape with the last Huskie, Pitsenbarger chose to stay on the ground and aid the wounded. Soon the firefight grew too intense for the helicopters to return. Near dusk, as the VC launched another assault, Pitsenbarger fought back with an M-16. Then, he was hit several times as he made his way toward another wounded man. Pitsenbarger was shot four times, once between the eyes, and died on the spot. The next day one of Pitsenbarger’s best friends, Henry J. O’Beirne of Huntsville, Ala., a former Air Force pararescueman who had served with him and been his bunkmate, recovered his body. ‘He was an ordinary man who did extraordinary things,’ said O’Beirne.

‘He was the bravest man I’ve ever seen, and I saw it all,’ said Martin L. Kroah, Jr., who served two tours in Vietnam, one as a Special Forces officer. Kroah, of Houston, said he remembered Pitsenbarger being lowered through the trees at a time when small-arms fire was' so intense that it was deafening, and all a person could do was get as close to the ground as possible and pray.’ Before long Kroah had been wounded five times and was flat on the ground. ‘On three different occasions I glimpsed movement, and it was Pits dragging somebody behind a tree trunk or a fallen tree, trying to give them first aid,’ he recalled. ‘It just seemed like he was everywhere. Everybody else was ducking, and he was crouched and crawling and dragging people by the collar and pack straps out of danger….I’m not certain of the number of dead and wounded exactly, but I’m certain that the death count would have been much higher had it not been for the heroic efforts of Airman Pitsenbarger.’ Kroah added that the battle was so fierce that his own Army medic was frozen with fear and unable to move and that one of his fire-team leaders, a combat veteran of World War II and the Korean War, curled into a fetal position and wept.

‘For Airman Pitsenbarger to expose himself on three separate occasions to this enemy fire was certainly above and beyond the call of duty of any man,’ said Kroah. ‘It took tremendous courage to expose himself to the possibility of almost certain death in order to save the life of someone he didn’t even know….He had a total disregard for his own safety and tremendous courage.’

For the next couple of hours Pitsenbarger crawled through the thick jungle looking for wounded soldiers. He would drag them to the middle of the company’s small perimeter, putting them behind trees and logs for shelter. At one point, said Charles Epperson, of Paris, Mo., Pitsenbarger saw two wounded soldiers outside the perimeter. ‘He said, ‘We’ve got to go get those people,’ and I said, ‘No way. I’m staying behind my tree.’ It was just unbelievable fire coming at us from all sides. But he took off to get those guys, and I could see him trying to get both of them and having a hard time, so I ran out there and helped him drag them inside our lines. He was an inspiration to me,’ said Epperson.

Fred Navarro, who was seriously wounded, said Pitsenbarger saved his life by covering him with the bodies of two dead GIs, shielding him from more bullets. ‘We were getting pounded so bad that I could only lie on the ground for cover. Pitsenbarger continued cutting pant legs, shirts, pulling off boots and generally taking care of the wounded. At the same time, he amazingly proceeded to return enemy fire whenever he could,’ said Navarro, of San Antonio, Texas.

F. David Peters, of Alliance, Ohio, had been in Vietnam only two weeks at the time of the incident. He recalled that he was terrified when he was told to help Pitsenbarger during the firefight. ‘I don’t remember how many wounded were taken out when we started taking small-arms fire,’ said Peters. ‘I remember him saying something to the [helicopter] pilot like, get out of here, I’ll get the next one out. His personal choice to get on the ground to help the wounded is undoubtedly one of the bravest things I’ve ever seen,’ said Peters.

Johnny W. Libs, a seasoned jungle fighter who was leading Company C that day, said he’d never seen a soldier who deserved the Medal of Honor more than Pitsenbarger. He recalled telling one of his machine-gunners, Phillip J. Hall, of Palmyra, Wis., that Pitsenbarger was out of his mind to leave his chopper for ‘this inferno on the ground. We knew we were in the fight of our lives and my knees were shaking, and I just couldn’t understand why anybody would put himself in this grave danger if he didn’t have to.’ Libs, of Evansville, Ind., also said that Pitsenbarger seemed to have no regard for his own safety. ‘We talk about him with reverence. I [had] never met him, but he’s just about the bravest man I have ever known. We were brave, too. We did our job. That’s what we were there for. He didn’t have to be there. He could have gotten out of there. There’s no doubt he saved lives that day.’

Hall said that Pitsenbarger’s descent into the firefight ‘was the most unselfish and courageous act I ever witnessed. I think of him often now,’ he added. ‘That thing never leaves my mind totally. He did actually give up his life for guys on the ground that he didn’t even know. And he didn’t have to be there. I know he made the conscious decision to stay there.’ Salem said that Pitsenbarger had volunteered to go to the ground because the soldiers were having trouble putting a wounded man into the wire basket to be lifted out. The helicopter pilot recalled telling Pitsenbarger that he could leave the chopper only if he agreed that, when given a signal, he would return to the aircraft. ‘As we were [getting in position], I said, ‘Pits, it’s hotter than hell down there; do you still want to go down?’ He said, ‘Yes sir, I know I can really help out.’ He made a hell of a difference. We ended up getting nine more out after he got on the ground. He is the bravest person I’ve ever known,’ Salem said.

For coordinating the successful rescues, caring for the wounded and sacrificing his life while aggressively defending his comrades, William H. Pitsenbarger received the Air Force Cross on June 30, 1966. After review, the original award was upgraded, and on Dec. 8, 2000, the Medal of Honor was presented to his family in a ceremony at the U.S. Air Force Museum. Airman Pitsenbarger is the 59th Medal of Honor recipient.