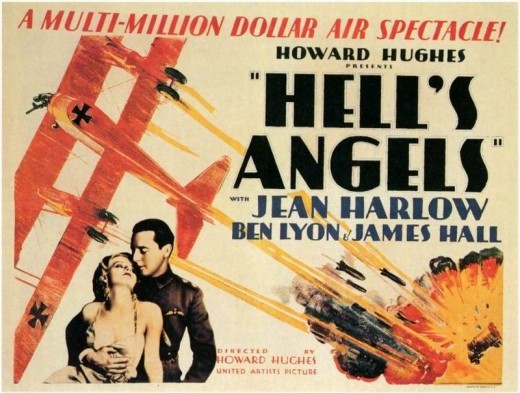 The lineage of the term Hell's Angels can be traced back many years, while the famous Californian motorcycle club can undoubtedly find its origination in combat veterans who went on to find camaraderie riding motorcycles together post WWII, the phrase actually originates in this context from a 1930 aviation war movie directed and produced by Howard Hughes. The Hollywood blockbuster starred Ben Lyon, James Hall and Jean Harlow, and centred on the combat pilots of World War I. Despite its initial poor performance at the box office, it eventually earned its production costs twice over. Controversy during the Hell's Angels production contributed to the film's notoriety, including the accidental deaths of several pilots, an inflated budget, a lawsuit against a competitor, and repeated postponements of the release date. Originally shot as a silent film, Hughes retooled the film over a lengthy period. Most of the film is in black and white, but there is one colour sequence—the only colour footage of Harlow's career. Hell's Angels is now hailed as one of the first sound blockbuster action films. 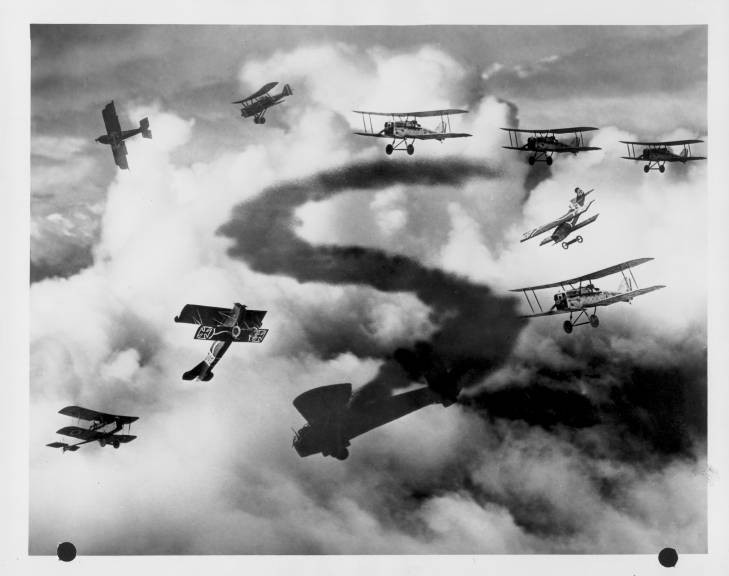 Hell's Angels received its premiere in Hollywood on May 24, 1930. All the stars and makers of the film attended, as well as Buster Keaton, Douglas Fairbanks and Charlie Chaplin with his girlfriend Georgia Hale. A program with leather cover was designed for the premiere by famed aviation illustrator Clayton Knight. Reviews were universal in acclaim for the flying scenes but the mundane plot and maudlin characterisations were also noted. The Hell's Angels screening revealed many traits of pre-code Hollywood. In addition to some fairly frank sexuality, there was a surprising amount of adult language (for the time) during the final dogfight sequence, e.g. "son of a bitch", "goddamn it", and "for Christ's sake", along with the words "ass", "hell", and a few uses of "God" in other scenes.

Harlow, Lyon and Hall received mixed reviews for their acting, Hughes was praised for his hard work on the filming and aircraft sequences. Mourdant Hall, reviewer for The New York Times, was especially critical about Harlow's performance, saying, "his film is absorbing and exciting. But while she is the centre of attraction, the picture is a most mediocre piece of work." 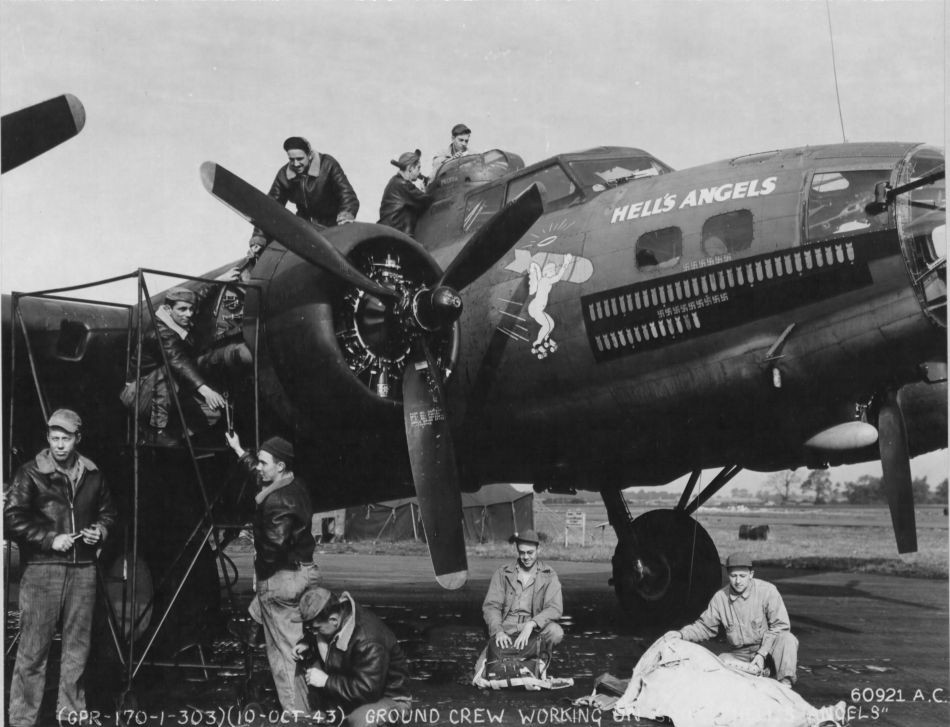 Probably the most well known usage of the phrase Hell's Angels in a factual military context can be seen in the USAAF 303rd Bombardment Group (Heavy), the group was activated on 3 February 1942 at Pendleton Field, Oregon and finally assembled later that year at Molesworth, England, flying its first combat mission on 17th November 1942 with a planned strike at the St. Nazaire submarine pens. Over the months and years that followed, lessons were learned, equipment was improved, and the tale of Hell's Angels "Might in Flight" evolved. First targets were usually airfields and marshalling yards in France and the Low Countries. Several targets in Paris were struck in 1943 and, although it was defended by about 250 flak guns, only one plane was lost in six attacks. The 303rd formations often encountered the 'Abbeville Kids', the yellow-nosed FW 190s flying out of the airfield just north of Abbeville, France. Their attacks were in retaliation to the 303rd's bombing of Abbeville on 10 July 1943. They didn't take kindly to our bombing and took great joy in finding a 303rd BG formation.

Soon, many German targets were hit and, to mention a few, Mannheim and Ludwigshafen were attacked 12 times with only five losses. The transport and industrial centre of Frankfurt was bombed nine times in 1943 and 1944, in which only three aircraft were lost. The 15 August 1944 attack on the Wiesbaden airfield cost the group nine bombers. Cologne rail lines and industry were the targets on 10 missions, including the famous glide bomb attack. The largest marshalling yard in Germany, located at Hamm, was hit six times and its flak defences accounted for two aircraft down. In the later stages of the war, the 303rd bombers struck industrial sites, transportation hubs, and oil refineries at Munich, Magdeburg, Hamburg, Gelsenkirchen, Merseburg, Leipzig, Essen, Schweinfurt. Bremen, Stuttgart, Kiel and Brunswick with increase in efficiency and decreasing losses. 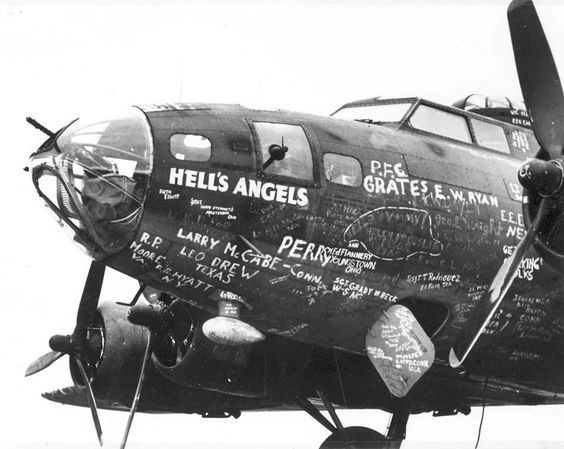 As part of the joint USAAF-RAF objective to eradicate the "buzz bomb" threat, 303rd crews attacked 12 sites between 28 February and 30 August 1944 at altitudes of 12,000 and 14,000 feet. On 11 January 1944, leading the First Division, the 303rd hit Oschersleben, Germany, after most of the 8th Air Force and its fighter escort had aborted due to weather. The devastating strike was the beginning of the end for the German Air Force, but cost 10 aircraft (42 altogether in the First Division). For this valuable contribution to the war effort, the men of the Hell's Angels Group, both air and ground echelons, wear the badge of a Distinguished Unit Citation.

On 6 March 1944, the Group participated in one of the first strikes on Berlin. Later, they carried their bombs as far east as Poland, where one of the most compact bombing patterns of the war destroyed an industrial site. The 303rd was, of course, part of the aerial support on D-Day, 6 June 1944. On that date, the crews flew three separate missions between dawn and dusk in a ground support role rather than a strategic bombing force. Bombing almost around the clock occurred in June when 29 missions and 1000 sorties were flown. In tribute to one of the most famous Flying Fortresses of World War II, 'Hell's Angels' #41-24577, the 303rd Bombardment Group took its name. In the inventory since the Group's beginning, this aircraft was the first heavy bomber in the 8th Air Force to complete 25 missions. 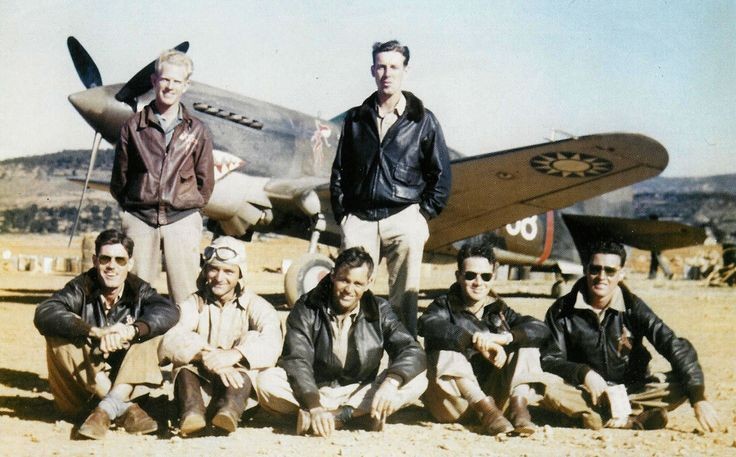 While the 303rd's usage of 'Hell's Angels' is the most well known, the first noted use of the phrase was actually with the 3rd Pursuit Squadron of the American Volunteer Group (AVG). The AVG, more famously known 'The Flying Tigers' were a secret United States military operational entity, authorised and approved by then President Franklin D. Roosevelt, on 23 December 1940. As part of this covert operation, which had been requested by Claire Lee Chennault (a former USAAC pilot instructor and veteran of the 94th 'Hat in the Ring' squadron during WWI) on behalf of Chaing Kai-Shek and the Chinese government, who had been at war with the Empire of Japan since 1937. The AVG received 100 P-40 fighter aircraft, diverted from a shipment to England. The personnel were recruited from active branches of the War Department: the Army, Navy and Marine Corps. Pilots, maintenance, communications, clerical and medical personnel were secretly recruited from active duty units. All documentation, equipment and personnel transfers were processed through and by the Central Aircraft Manufacturing Company (CAMCO), as approved by the US Government. Nothing could then be traced to the United States government, which was not yet in conflict with the Empire of Japan. Chaing Kai-Shek appointed Chennault Commander of the AVG.

The AVG was divided into four elements: a headquarters squadron and three fighter squadrons. Each squadron selected their respective name, which was the custom of the time for military aviation units. The First Pursuit Squadron (1PS) became the Adam & Eve's. The Second Pursuit Squadron (2PS) became the Panda Bears. Chuck Older, Ken Jernstedt, Tom Haywood and Ed Overend, all former USMC pilots, selected the name 'Hell's Angels' for the Third Pursuit Squadron (3PS). Each squadron designed their own squadron insignia. The 'Hell's Angels' opted for a red silhouette of a curvy woman with halo and wings outlined in white. Each Hell´s Angels pilot had his own 'Lady' painted on his individual aircraft and this same insignia is still used today by active United States Army, Marine Corps and Air Force squadrons. During the seven month combat operations of the AVG this unit acquired a record of 297 Japanese aircraft destroyed, as confirmed by British and Chinese Intelligence. Other sources have placed the total Japanese aircraft destruction, caused by the AVG, at well over 600 to 900, including aircraft destroyed on the ground during strafing operations. The AVG was disbanded on 4 July 1942, at which time few accepted returning into the US Army Air Force, most optioned to return to the US where they returned to active service or other war efforts. Chennault continued to command the 14th Air Force in the China Burma India Theatre (CBI). The 14th Air Force all referred to themselves as 'Flying Tigers', even though the real 'Flying Tigers' had been deactivated on 4 July 1942. 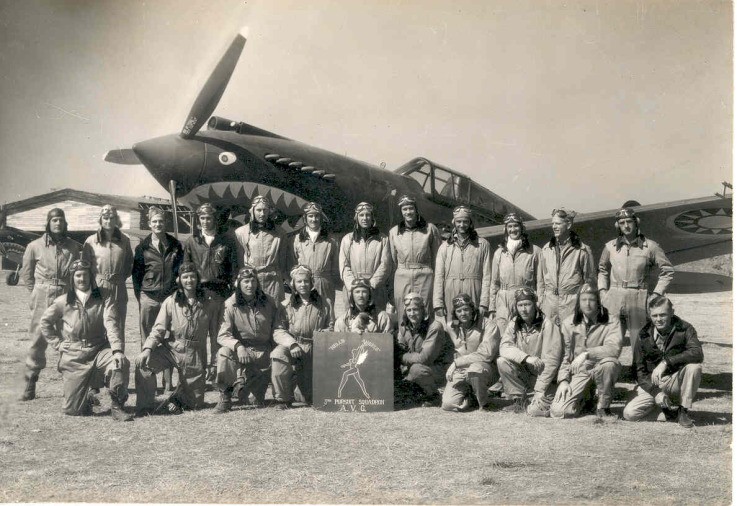 According to the lore of the Hells Angels Motorcycle Club it was Arvid Olsen, the former Squadron Leader of the 3rd Pursuit Squadron that gave the idea of the name to the actual founders of the HAMC, in Fontana, California in the late 1940's. Although Olsen was never an actual member of the HAMC, he was known to associate with the founding members. The selection of HAMC colours, red on white, could be viewed a result of the association of Olsen with the HAMC founders, like the insignia of the 3PS "Hell's Angels". It is also worth noting that the Deathshead insignia of the HAMC, can also be traced to two USAAF insignia designs, the 85th Fighter Squadron and the 552nd Medium Bomber Squadron.

It's undoubtably true that the majority of motorcycle and car clubs of the late 1940's were started by WW2 veterans, illustrated by the military clothing worn in many of the periods photographs. Motorcycle and car clubs exploded during this time, especially in California. Various reasons can be attributed to being the catalyst for this - many veterans returned with new mechanical skills and applied this training to making their vehicles go faster and perform better, others missed the camaraderie they found in in the brotherhood of combat and some found it difficult integrating back into society, whatever the reasons, these clubs created a lifestyle and culture that still resonates today.